My fuel flow has been erratic again recently. This has happened a number of times and Electronics International has always indicated that the cause is almost always the electrical connections. I’ve tried crimp connectors, solder, solder sleeves, and finally their own OLC-1 and now OLC-2 connectors. Interestingly, the problem would always appear to be resolved for a bit, but would then reappear some number of hours later.

A friend mentioned that he’d had a similar experience and a replacement fuel flow sensor fixed it. Out of other options to try, I ordered one and installed it tonight. 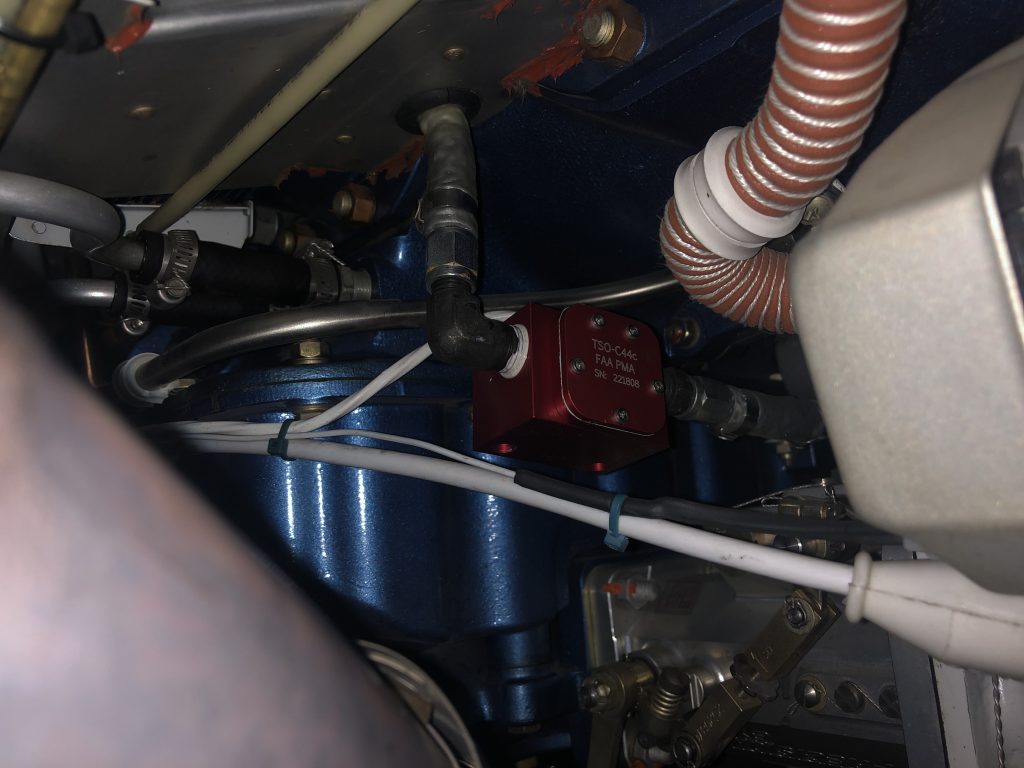 Their new OLC-2 connectors have two crimp screws per connector so you don’t have to try to hold both wires in place simultaneously while trying to tighten the screws. I don’t like how these connectors provide no strain relief for the wires, so I did my best to immobilize everything. 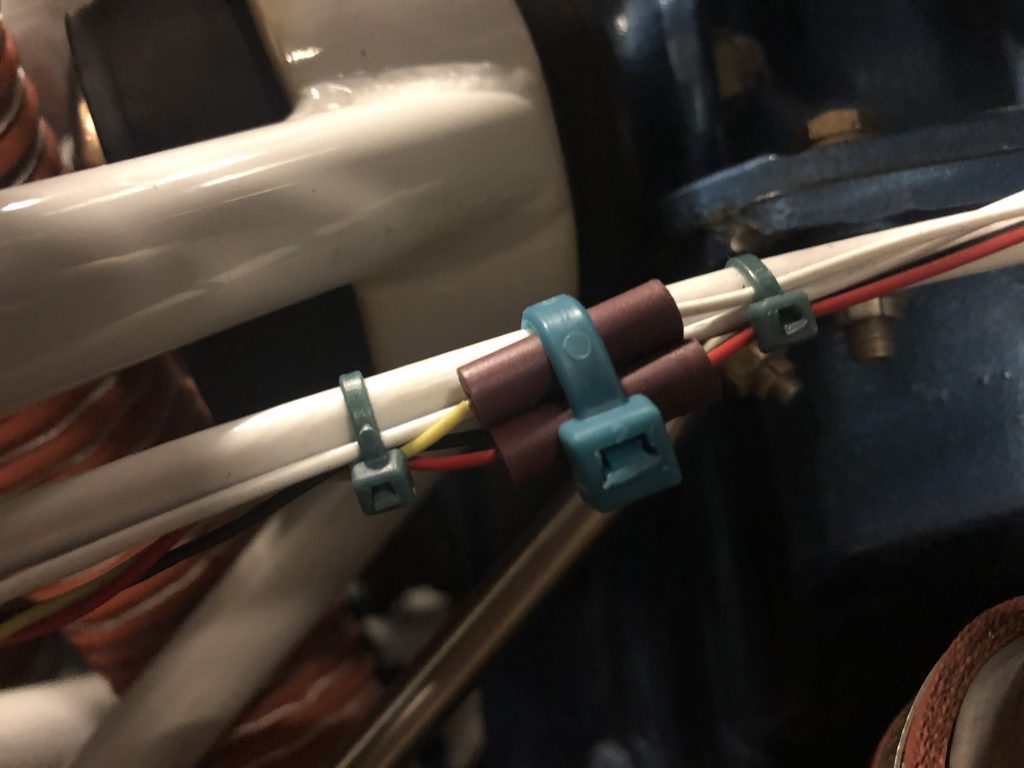 Saf-Air recently released an adaptor that allows you to add a quick drain to an AN fitting. My oil cooler has a tee fitting at the lowest point that I installed a cap on, but draining the oil from this point was always a bit of a pain. The adaptor lets me replace the cap with a quick drain that I can attach a hose to.

Unfortunately, my oil cooler was too close to the firewall for me to install it directly on the tee, so I needed to add a 90º fitting to point the assembly downward. I assembled the pieces on the bench since it was much easier to safety wire this way. 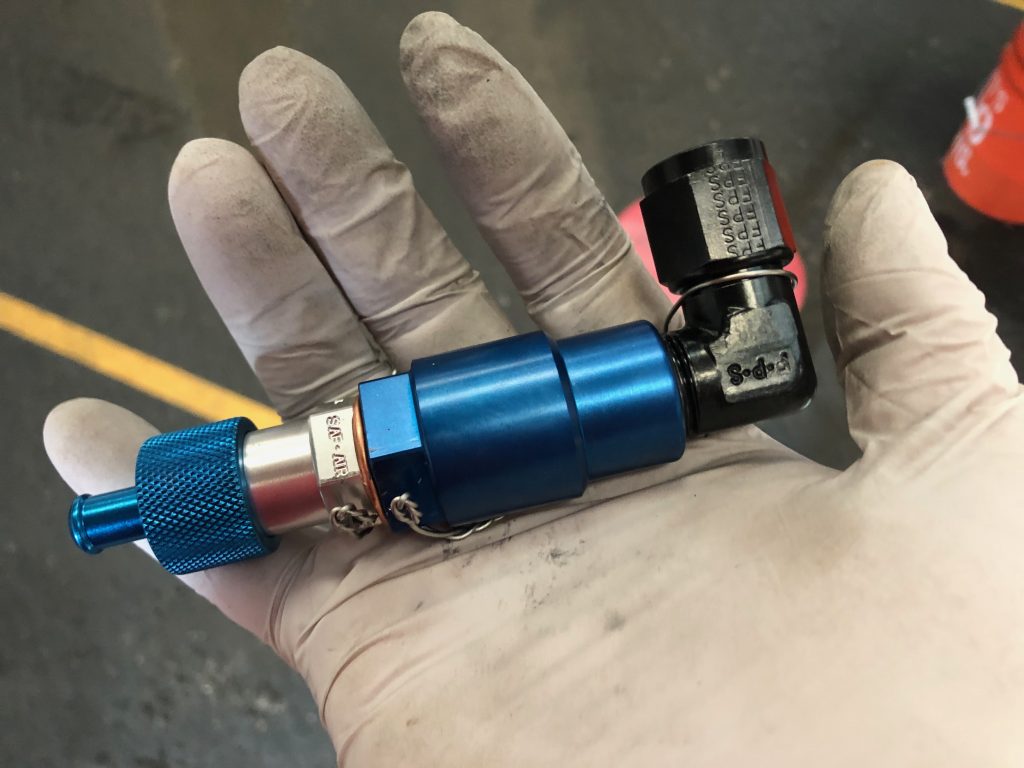 I then installed the assembly to the tee on the lower port of the oil cooler. 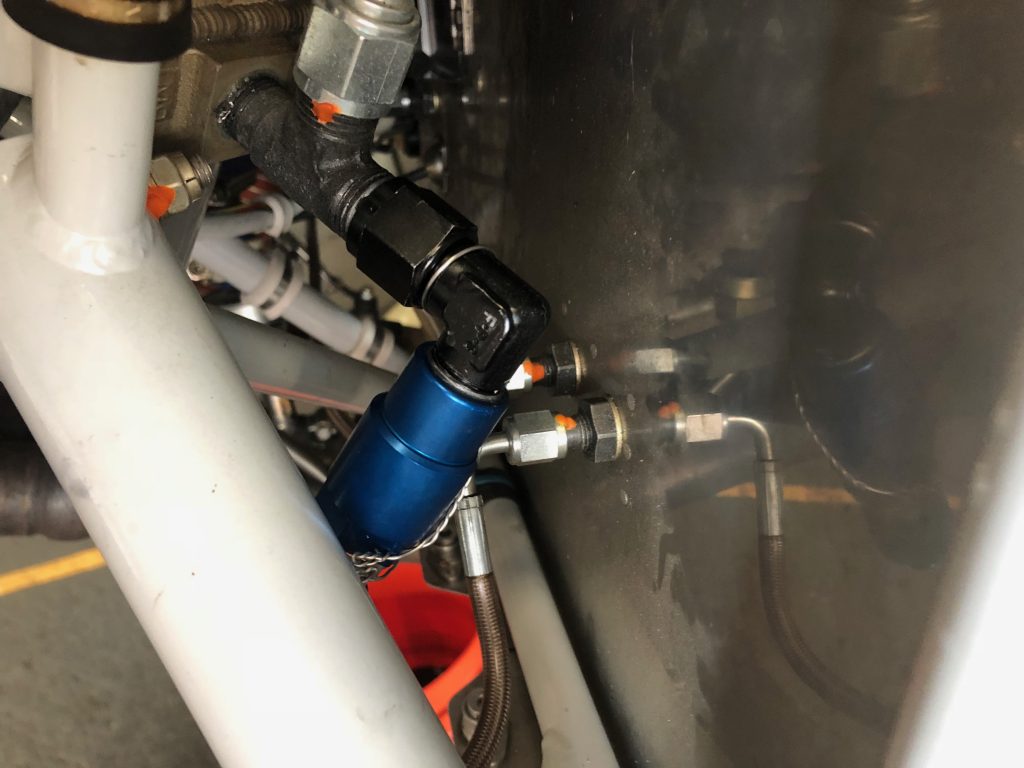 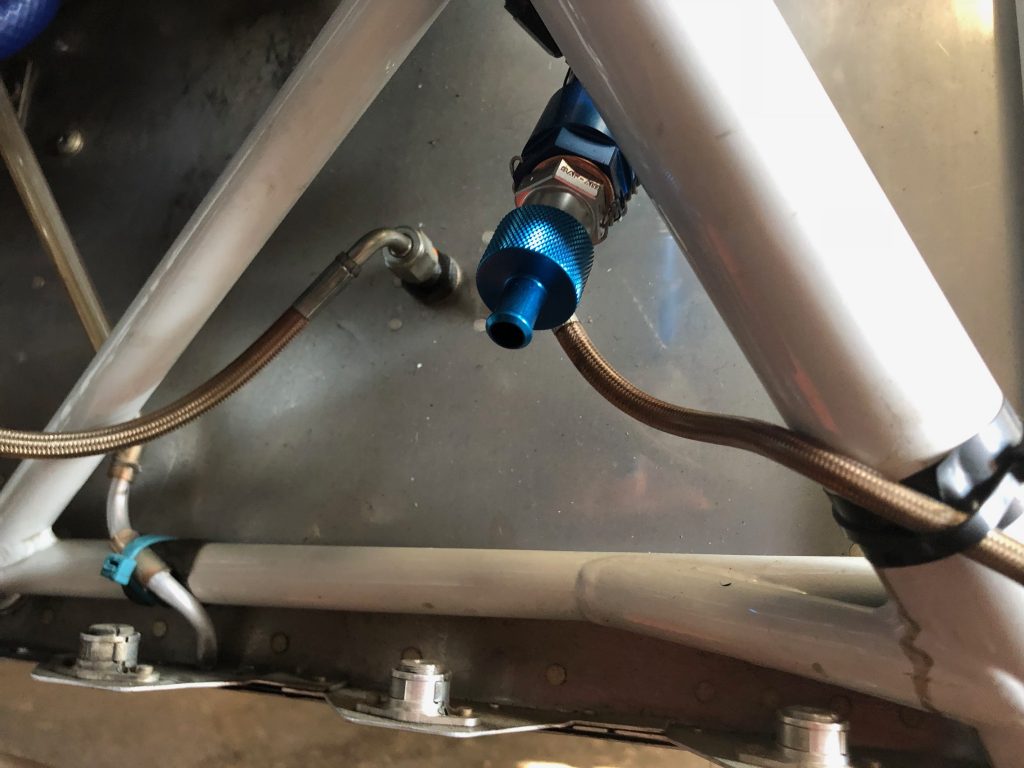 I recently noticed that my cabin heat wasn’t working. After a quick inspection, I realized the control arm on the heater valve had broken off of the flapper valve. The valve is a stainless steel unit from Plane Innovations which I upgraded to because I wanted to keep all steel components on the firewall.  I emailed the company about the best way to repair the valve and they rushed out a new one free of charge. I wish more companies had this kind of customer service.

Unfortunately, getting the old valve out requires pulling a substantial amount of the interior out. The heater valve is behind the tunnel cover which is under the fuel pump cover. The fuel pump cover sits under the forward seat pans, so the seats and carpets need to be removed. 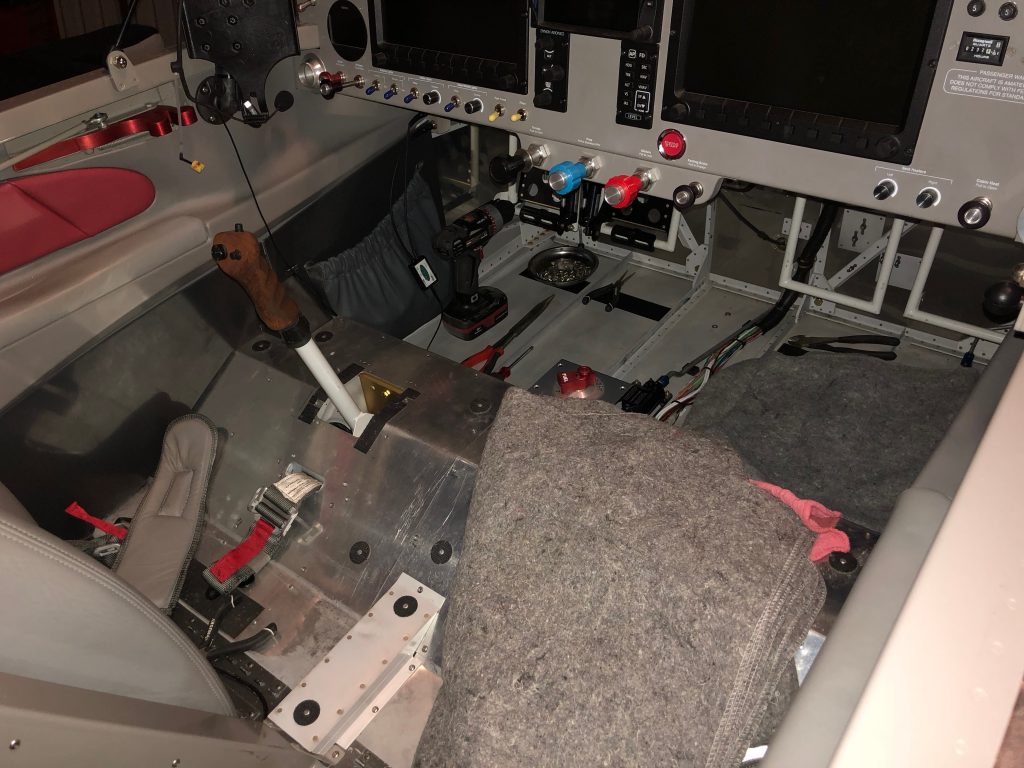 My son helped me remove the nuts holding on the heater valve. This is one of the few items that regrettably I didn’t attach to the firewall with nutplates. It would have made replacing it far easier. Unfortunately, adding nutplates now is virtually impossible, so we just bolted the new one on the same way. 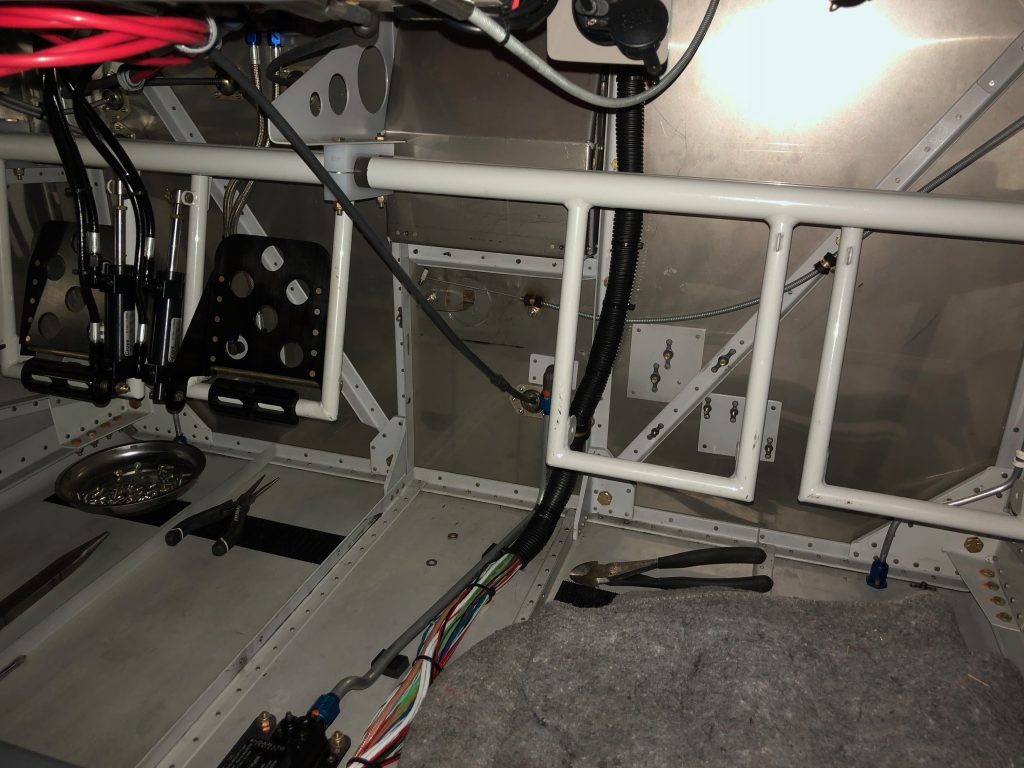 Here’s the failed heater valve. The spot welds simply failed due to the high vibration around the firewall. The new valve has five spot welds instead of four, but I’m not optimistic this will prevent this from happening again. 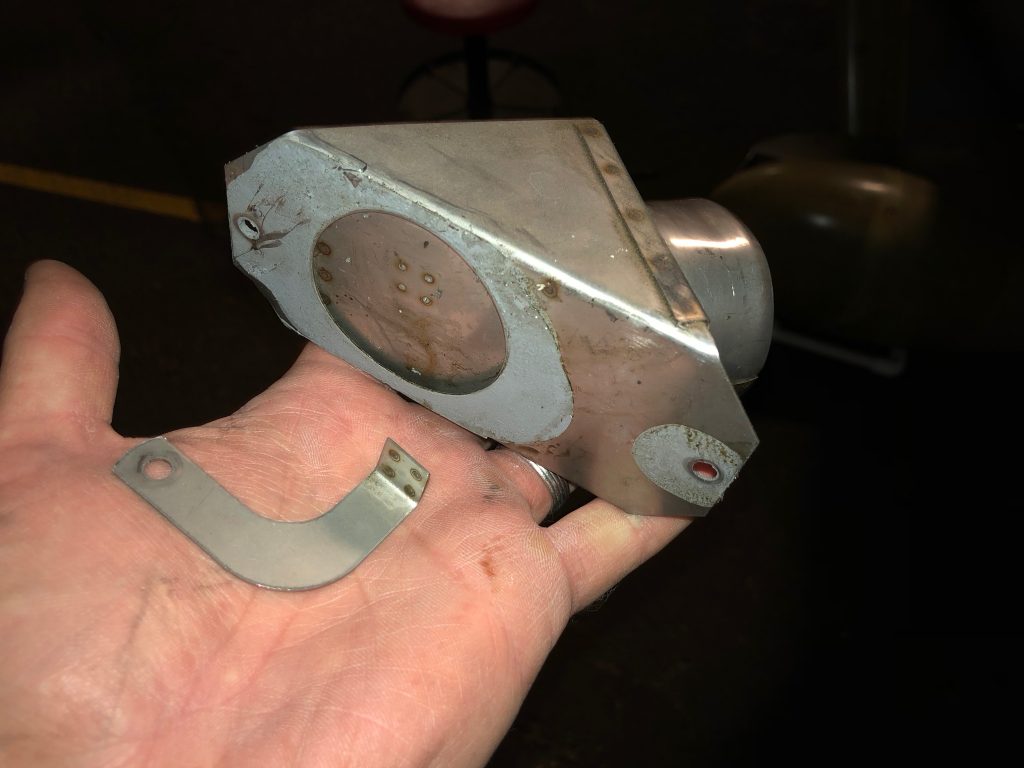 While taxiing in from a flight, I heard an odd clunk. I took off the cowling to do a careful inspection and found that both exhaust supports cracked all the way through right at the bend. Squeezing this tubing flat and then bending it clearly put too much stress in the metal. 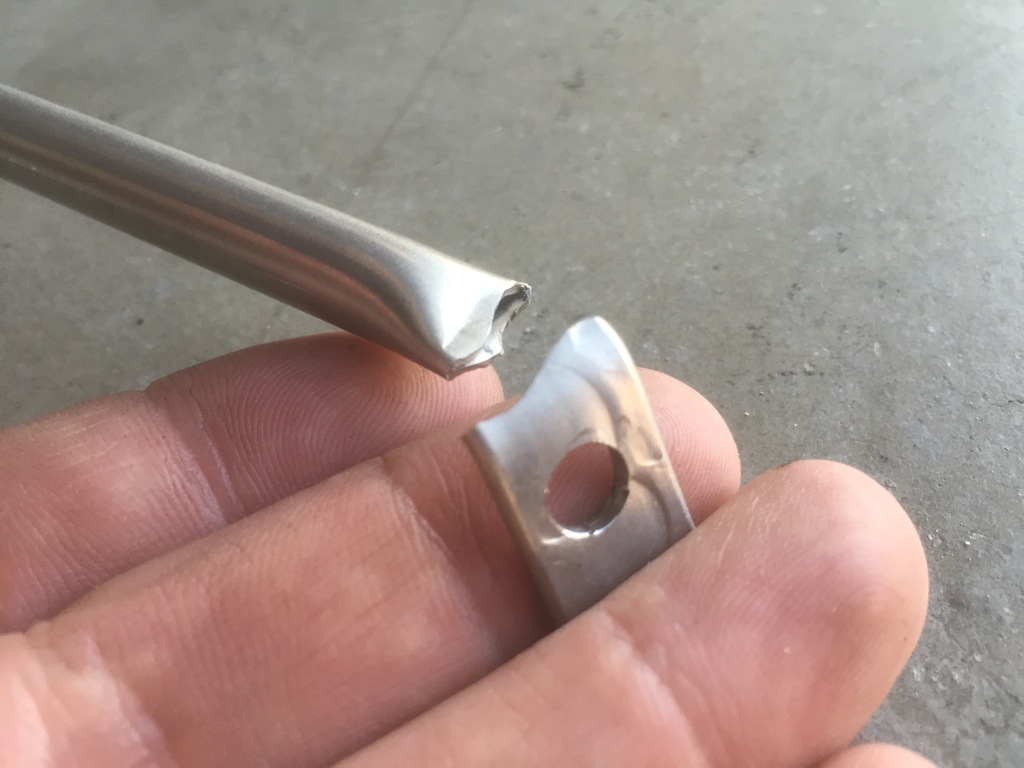 The bottom of the support just has a flattened piece of stainless steel tubing bolted to a bent piece of mild steel. The mild steel is much tougher and can withstand the vibration without cracking. 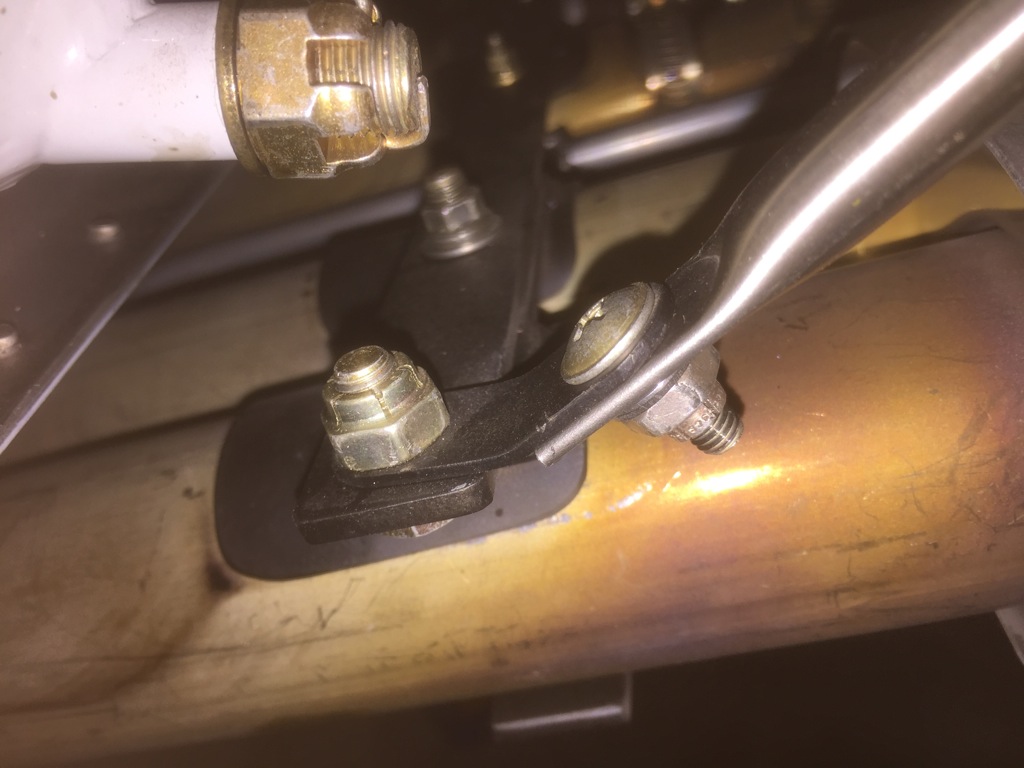 I replicated this arrangement at the other end of the supports.  Fortunately, it was a pretty quick fix and this should be much more durable. 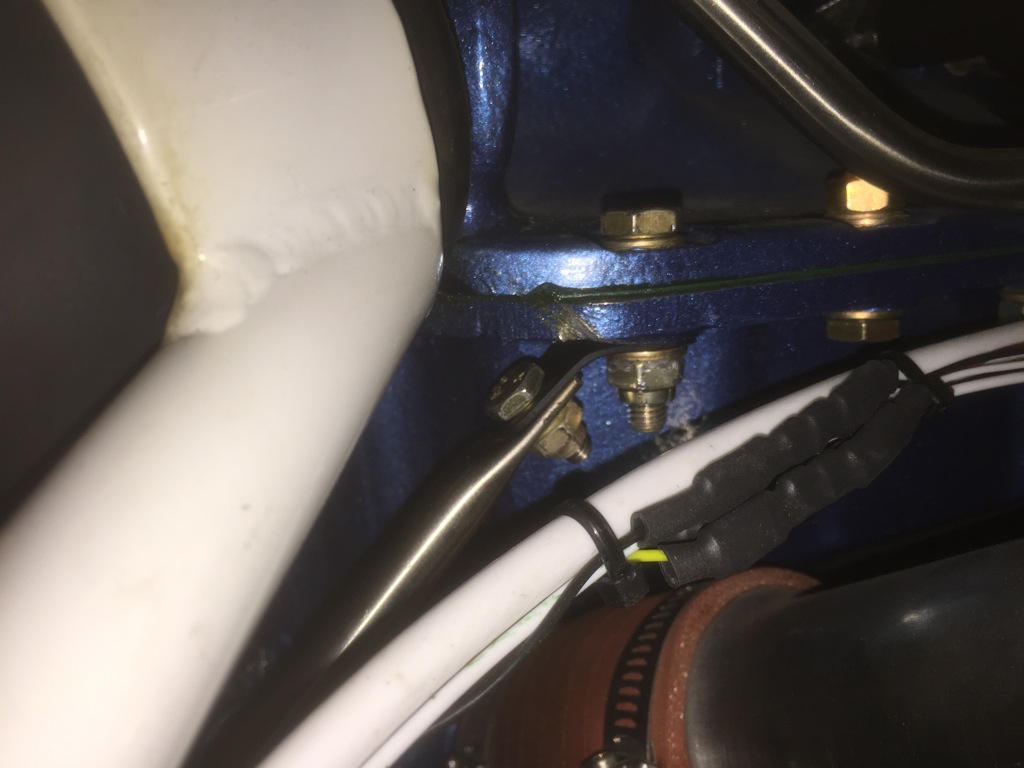 There is a thread on Van’s Air Force about carbon build up in the breather tube.  I pulled the tube off and there was some build up (maybe 10% of the cross-sectional area of the tube).  Most could be easily removed with a pick, but I used a wire brush to get the inside of the tube totally clean.  Here are all of the carbon bits that came out of the tube. 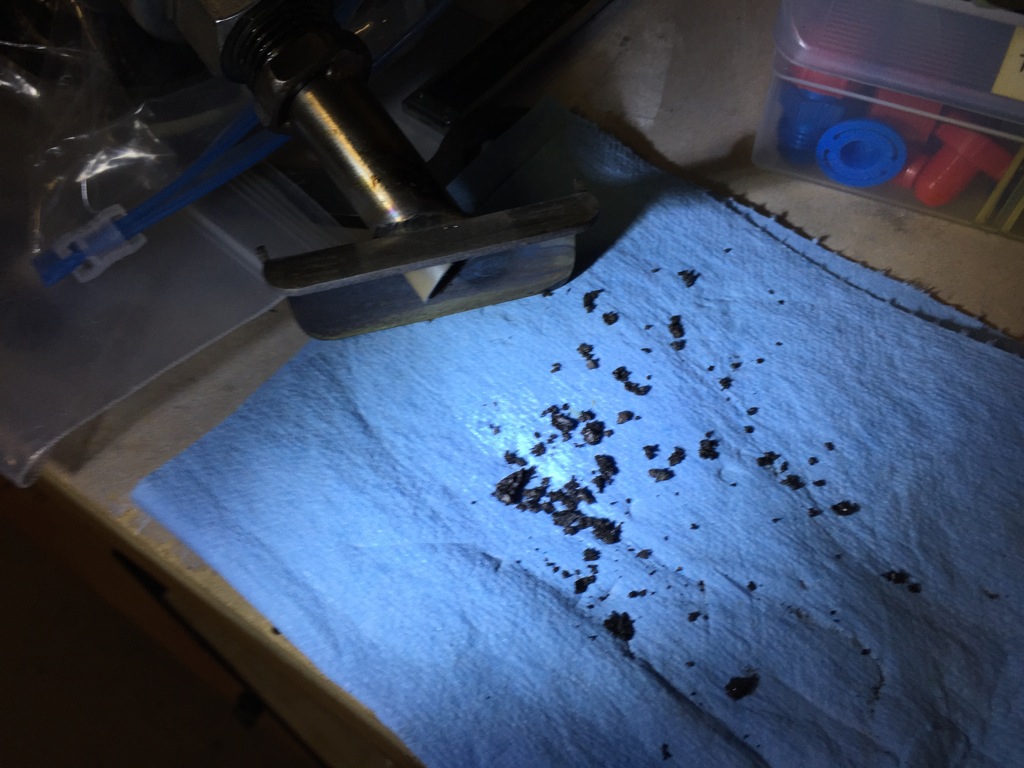 If this tube were to totally close off due to carbon buildup, it could pressurize the crankcase and blow out the front oil seal.  To prevent this, I put a T in the breather line and ran that to a second vacuum valve positioned above the exhaust pipe to burn off any oil that might drip out. 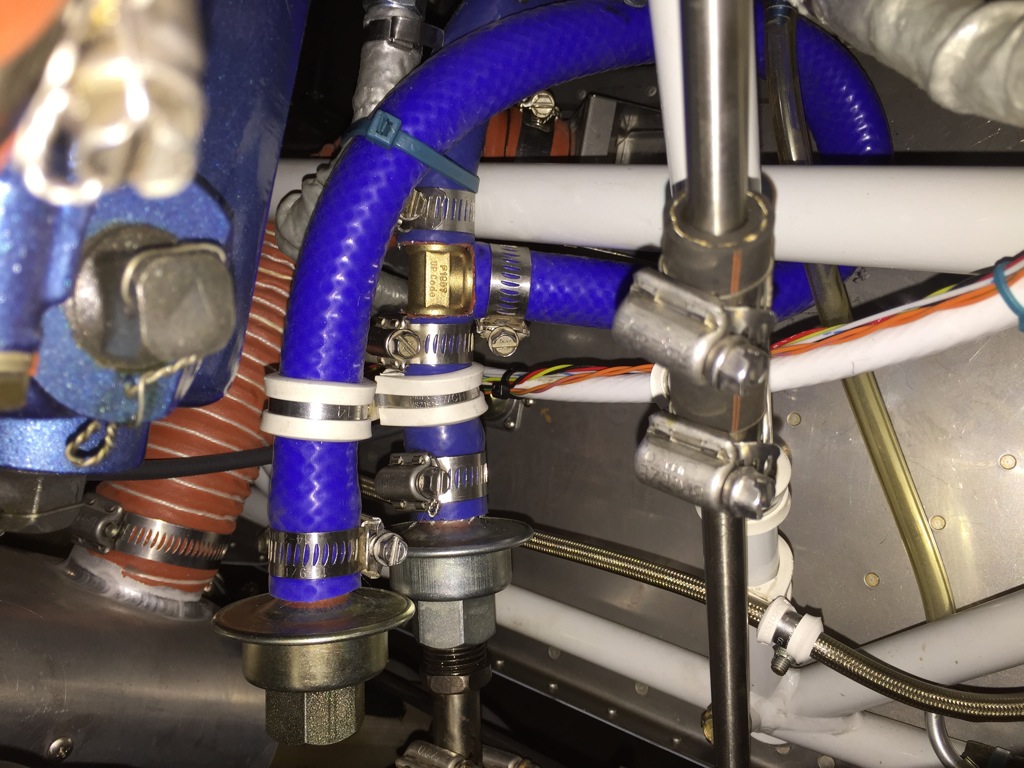 I needed to move the exhaust support tubes outward to clear the SCAT tubes going to the heat muff.  Sadly, I didn’t get any pictures while the cowl was off, so I tried to take some pictures of what I did through the openings in the cowl.  I replaced the aluminum bar that ties all four pipes together with one that is 4″ longer.  I drilled additional holes in each end to attach the clips that tie the stainless tubing to the bar.  This moves these supports out about 1 5/8″ on each side. 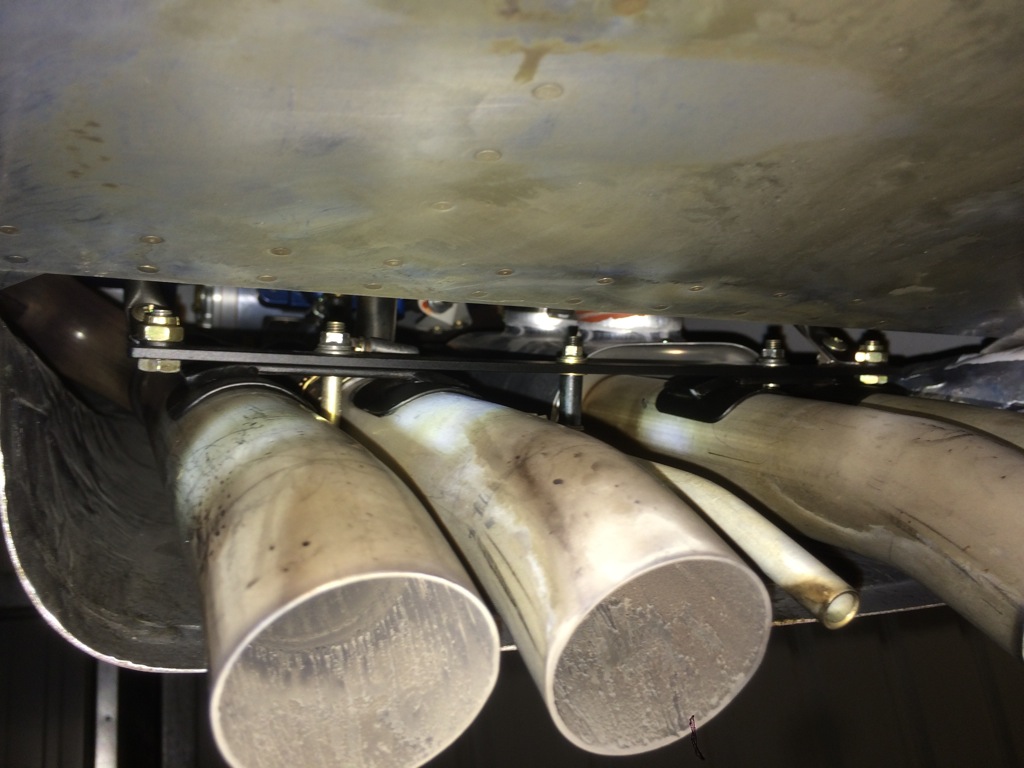 I rerouted both SCAT tubes and replaced the piece that was worn by rubbing on the exhaust support.  Now there is plenty of clearance all around.  This piece of tubing now runs above the lower engine mount tubing so it doesn’t rest against the wire going to the alternator. 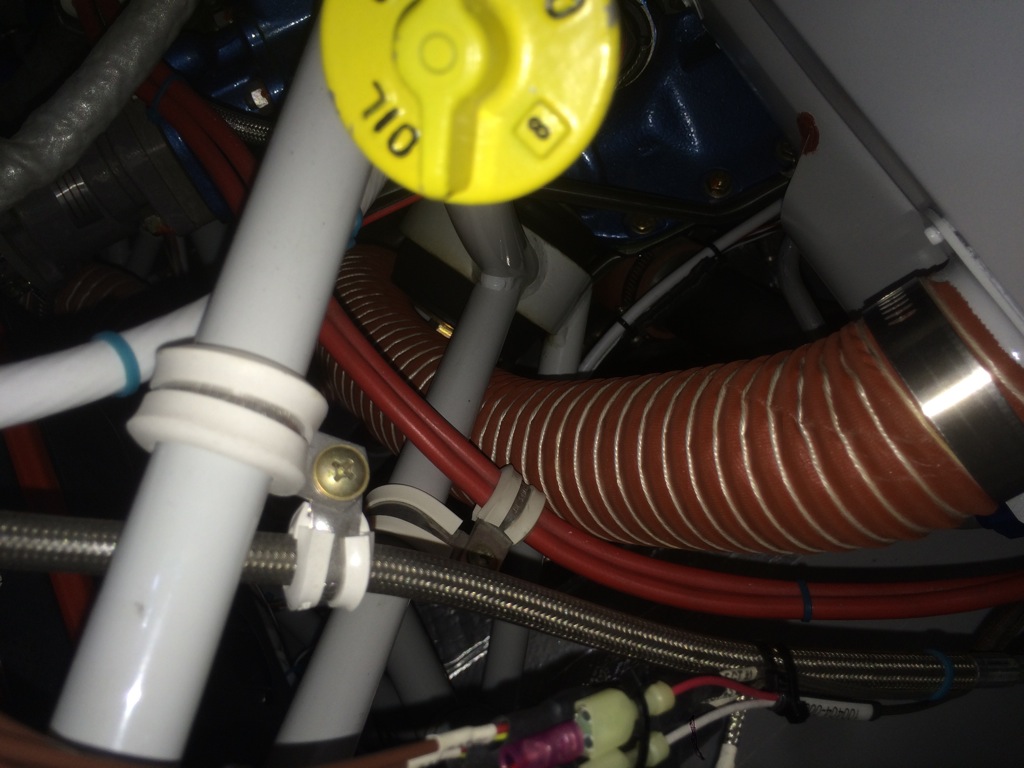 It’s pretty tough to see here, but the SCAT tubing from the heat muff to the firewall valve now runs under the horizontal tubing on the engine mount.  This shortens the tubing and provides a more direct path into the heat muff. 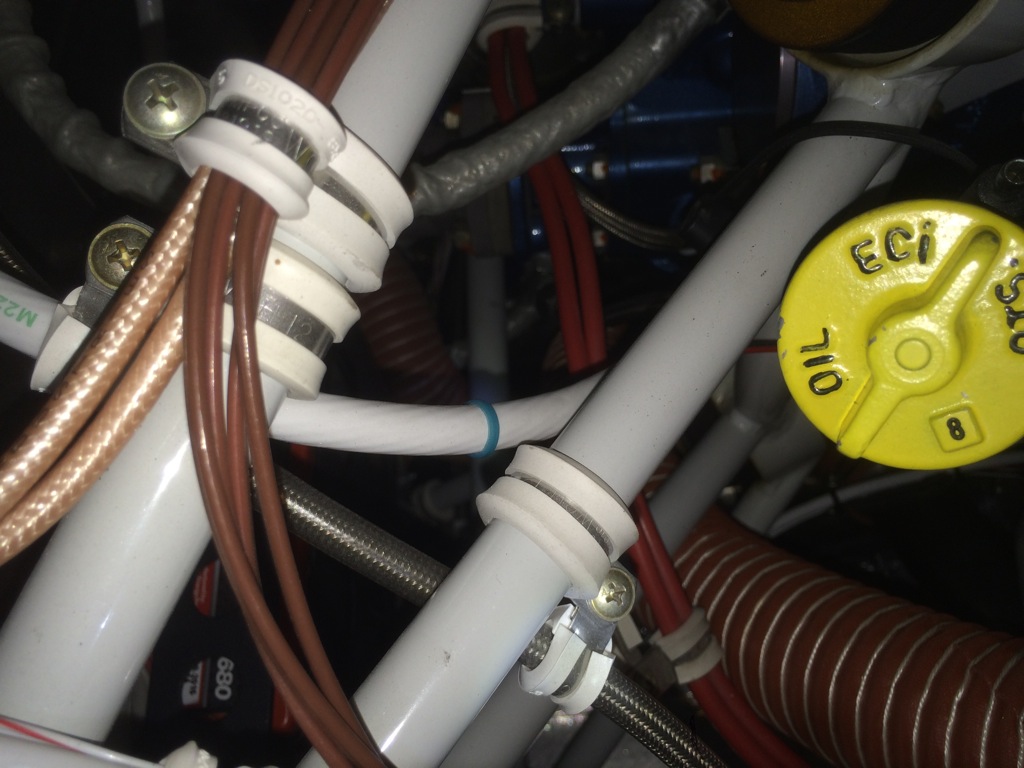 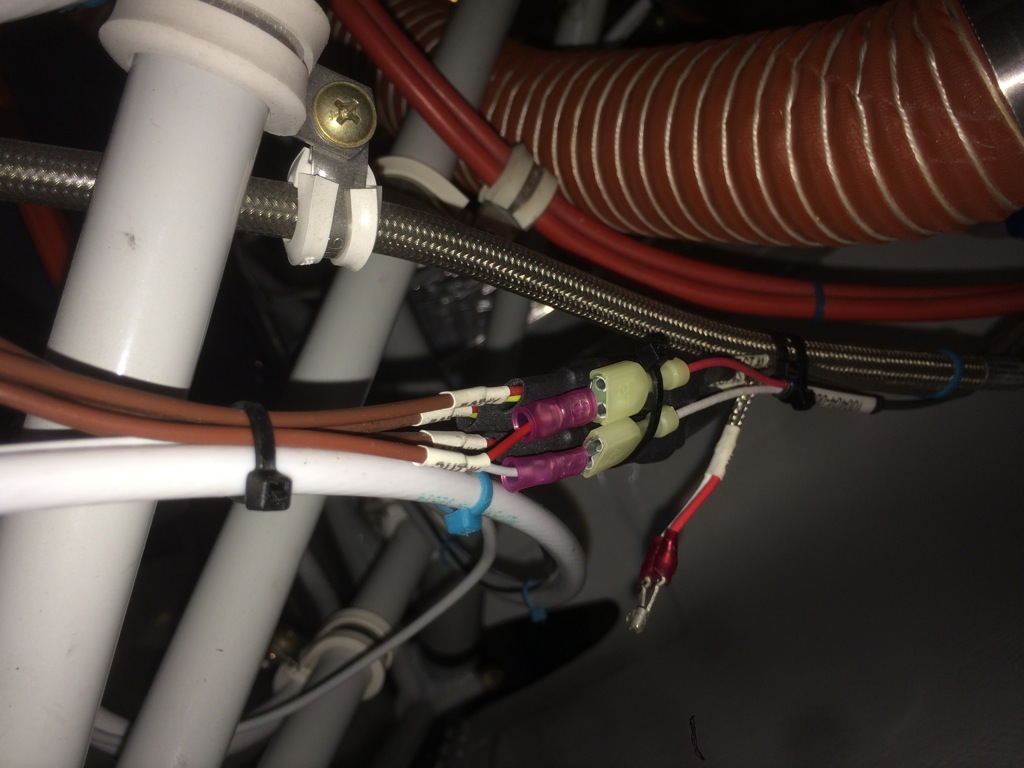 One of the things I’ve been needing to do is replace my exhaust supports.  I originally built them to the plans from Vetterman Exhaust which involved supporting them from the engine mount.  This puts stress on the exhaust as the engine shakes at startup and shutdown since the exhaust can’t move with the engine.  It’s better to support the exhaust from the sump so that it can move with the engine.  I ordered some 0.035″ wall thickness, 3/8″ OD stainless steel tubing and some MIL6000-6 rubber tubing which is the same as what came from Vetterman.  I cut the tubing to length and flattened each end so I could drill holes and bolt it to the sump and exhaust support.  There is about 1/4″ gap between the upper and lower tube, and I put a small flare in the end to keep the tubing from pulling out.  Here’s the lower end of the left support. 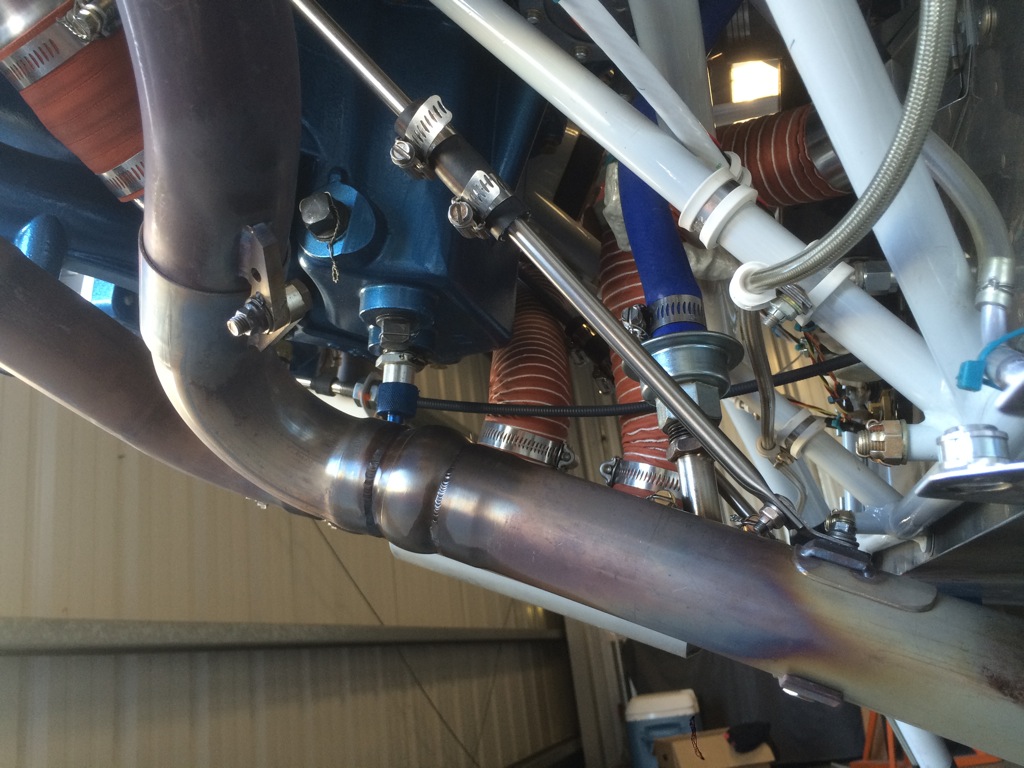 You can see the upper end has a bend to align with the sump. 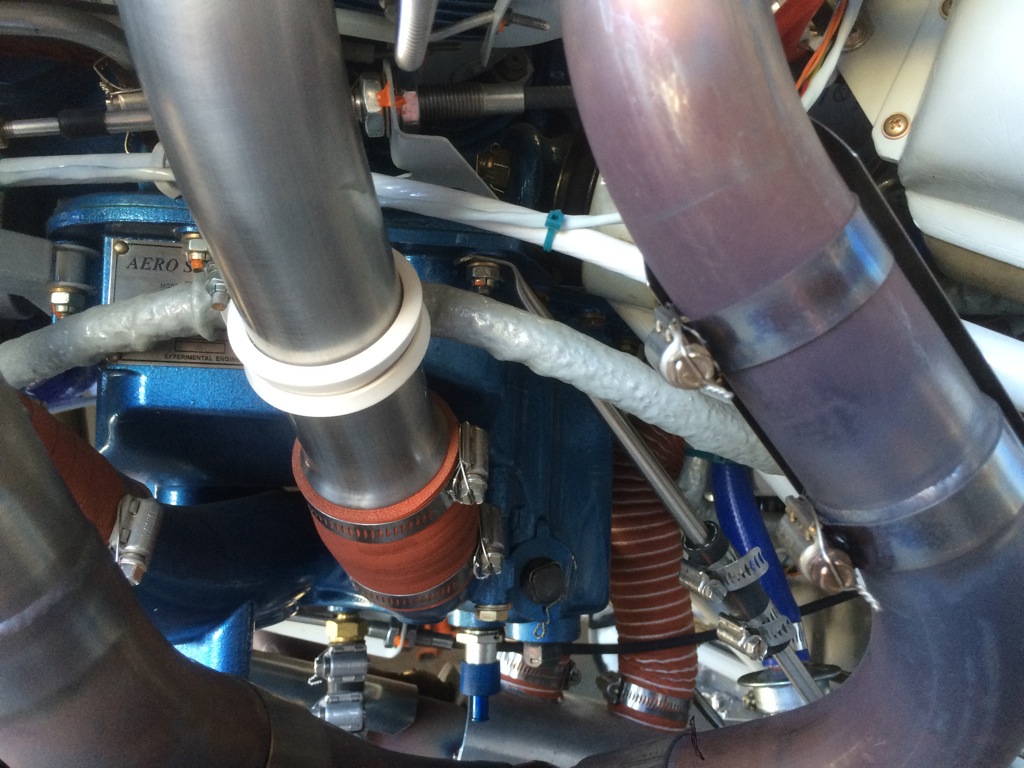 Here’s the left side.  This support runs tight against both pieces of SCAT tubing.  I’ll keep an eye on this for chafing.  If it does, I can fabricate a bracket to move the lower attach points outward and then reroute the forward SCAT tube so there is no interference. 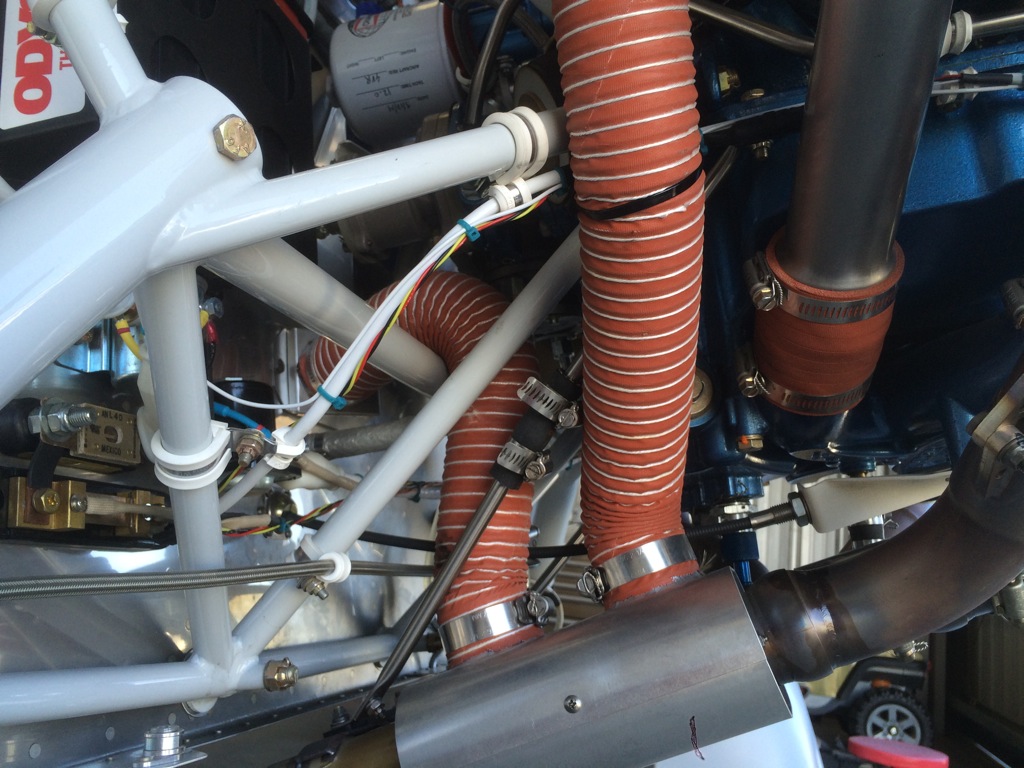 Since I had the aft baggage wall out to adjust the ADAHRS, I took the opportunity to inspect all of the elevator linkages and relubricate them.  I then vacuumed out the entire fuselage.  Despite doing this thoroughly before first flight, there was an amazing amount of debris including a large number of small metal particles from the drilling operation when assembling the fuselage.  I have no idea where these particles were hiding when I earlier cleaned out the fuselage.  I then reinstalled the aft baggage wall and all of the interior.

Before reinstalling the cowl, I adjusted the prop RPM again to hopefully get pretty close to 2700 RPM.  I also wrapped the fuel flow sensor with some extra thick fire sleeve and some safety wire.  It’s not the prettiest wrap job, but I’ll redo it if works.

I previously sent the backup battery from my left SkyView screen into Dynon because it didn’t seem to be charging during the first few flights.  They charged the battery and tested it and it was fine.  They sent it back to me so I installed it tonight and ran the battery test on both screens.  Both passed by powering the screens for 45 minutes (and new batteries should power the screens for more than 1 hour). 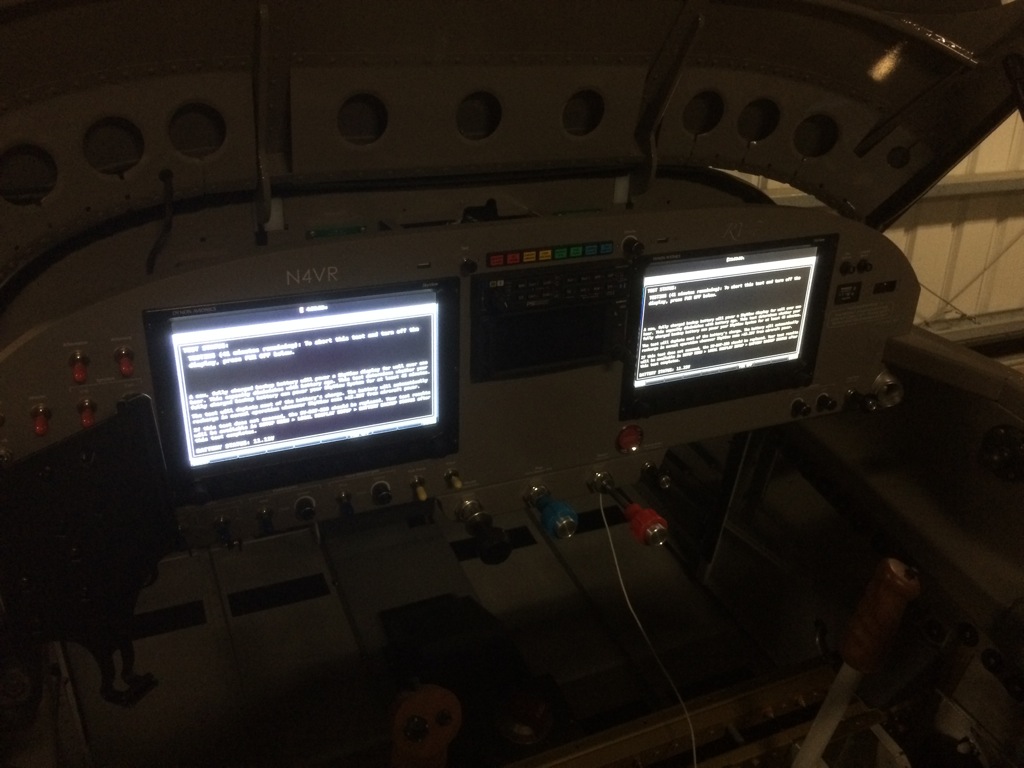 While the battery test was running, I replaced a couple of cable clamps in the engine compartment with non-cushion bowden clamps that hold the cable much more securely than the cushion clamps I was using before.  This is the clamp for the oil cooler butterfly control cable. 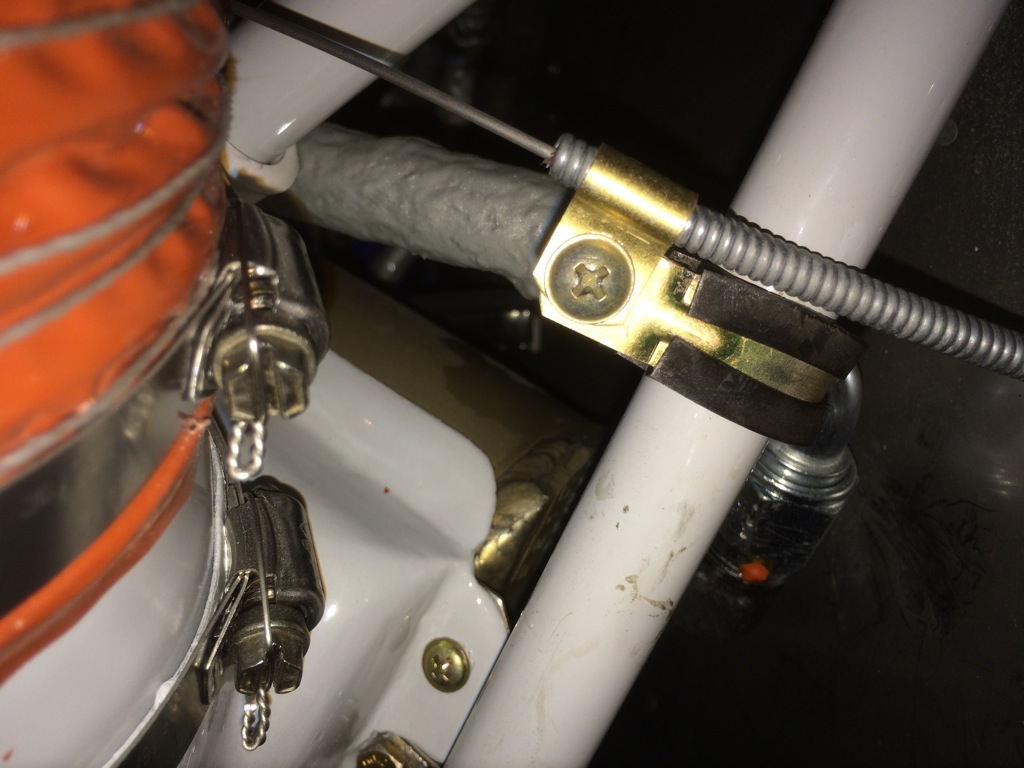 I also replaced the cable clamp at the forward end of the alternate air door control cable. 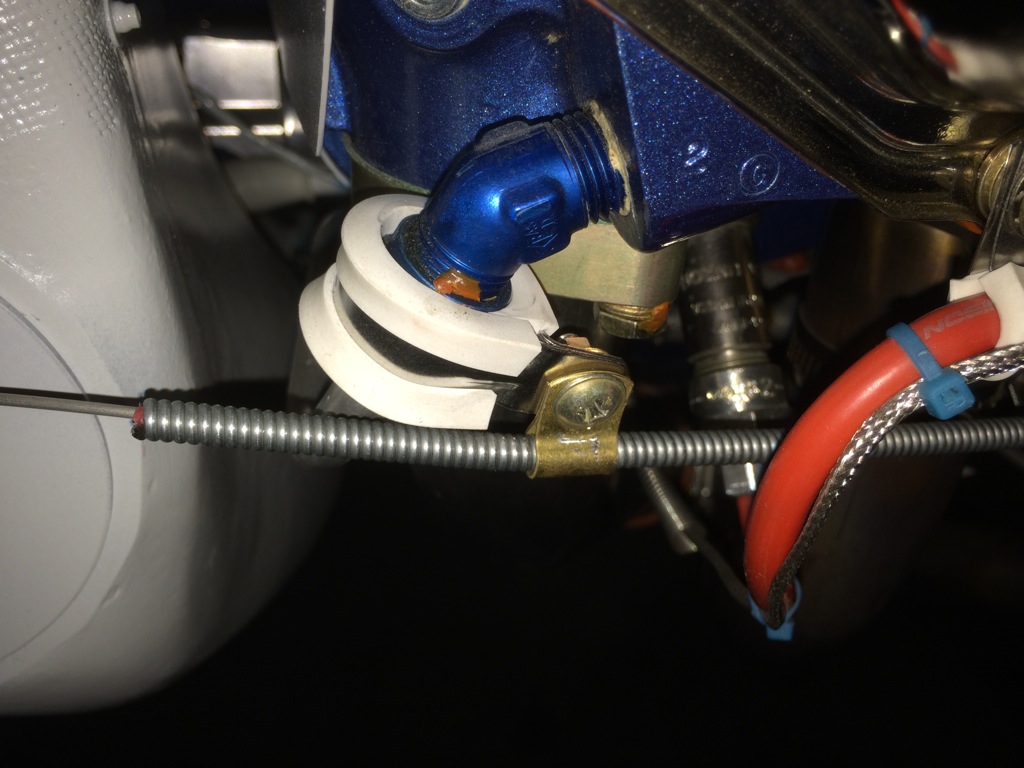 Finally, I decided to pull and clean the fuel filter again.  There was a surprising amount of gunk in the filter.  Most of the volume was some sort of fuzzy material, but there was also a lot of dust and even one small metal particle.  I redid the safety wire and installed it back in the airplane. 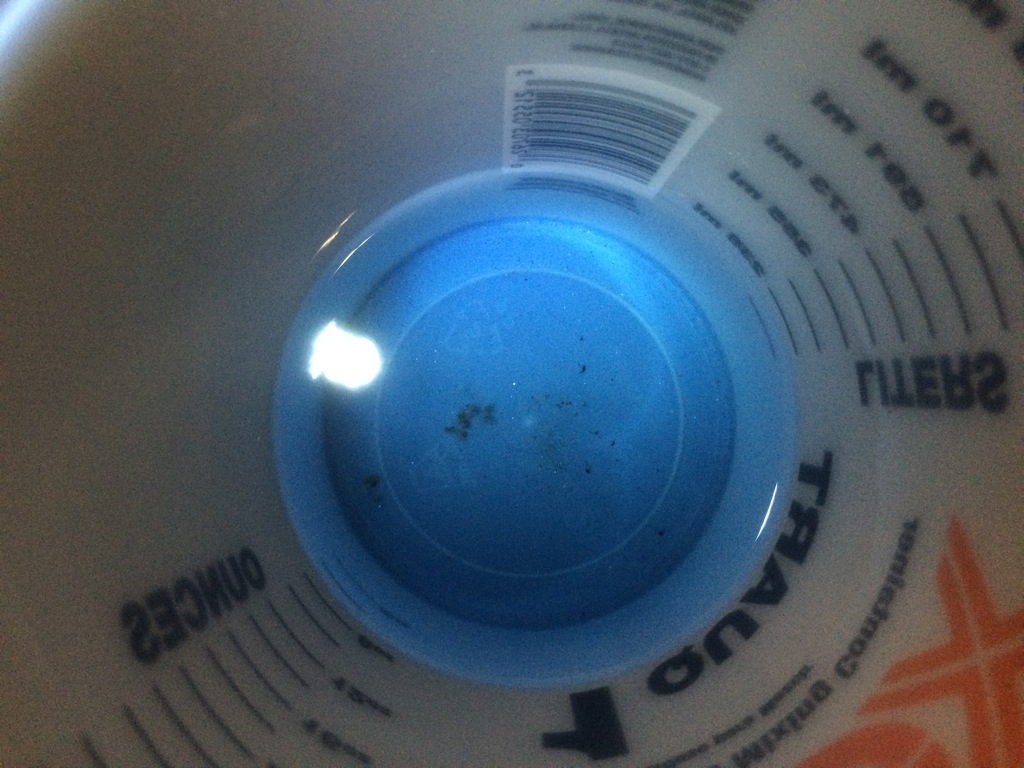 I wrapped up the oil change by installing a steel cap that Greg gave me to replace the aluminum one that I previously had installed.  I installed and torqued it down in order to mark where to drill for safety wire, then removed and drilled it.  I now no longer have any aluminum fittings anywhere forward of the firewall containing flammable liquids (oil, fuel and brake fluid).  I then filled the engine with oil. 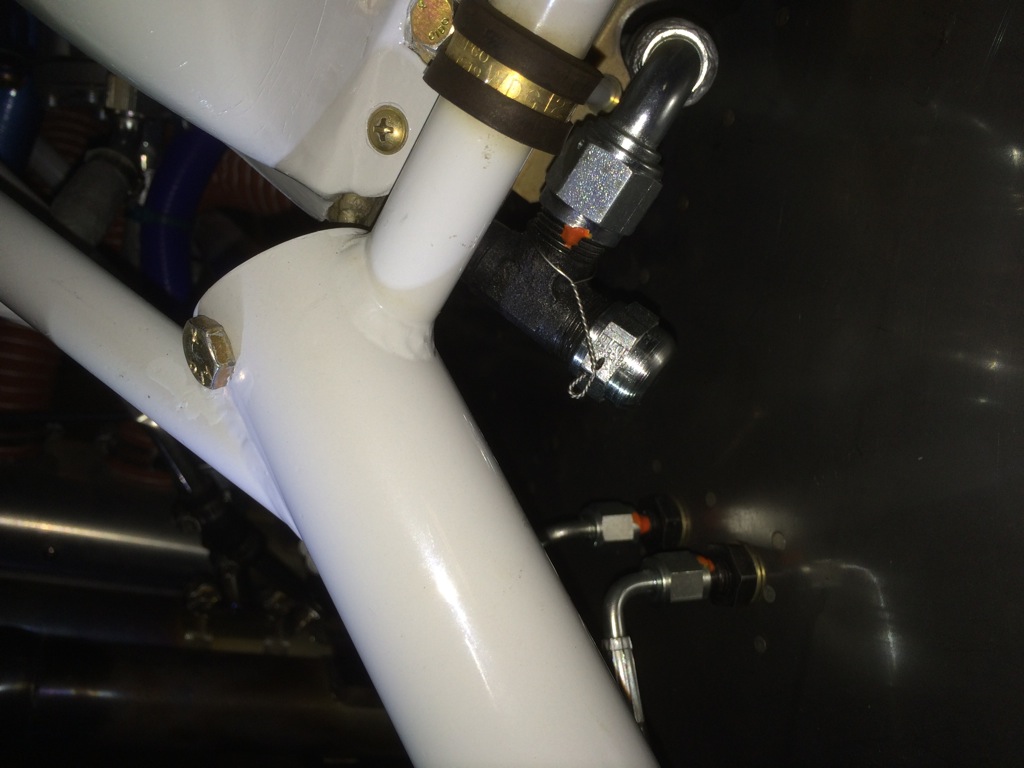 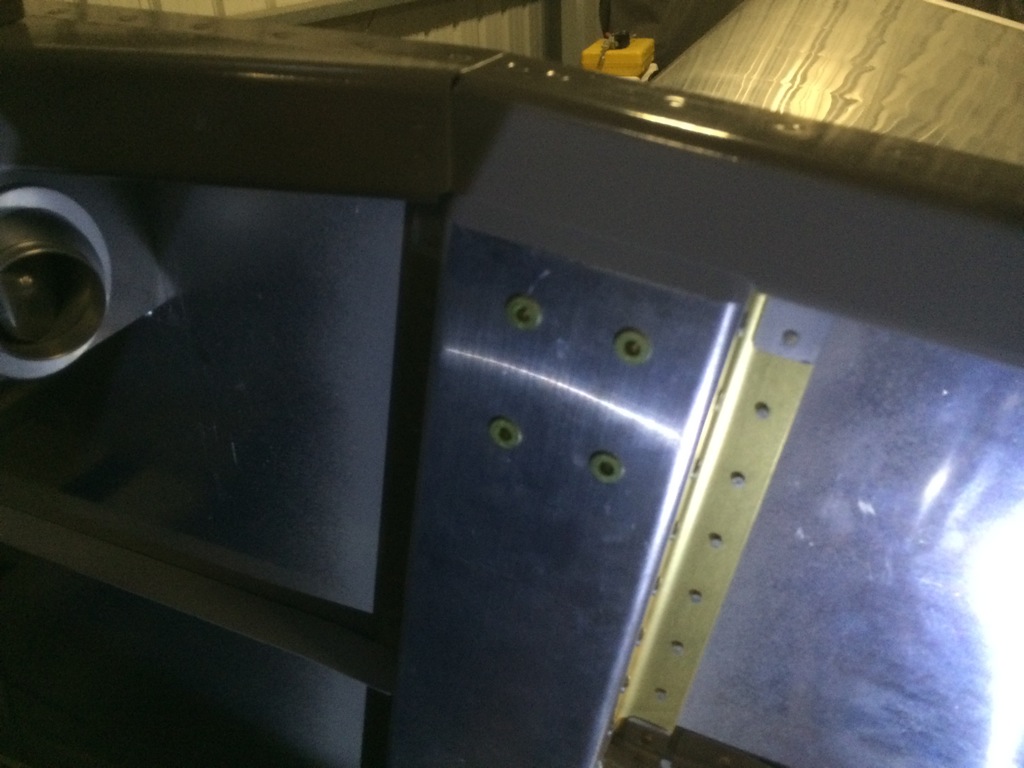 I reinstalled the upper side panels and then attached the RAM ball mounts.  Here’s the one on the passenger’s side. 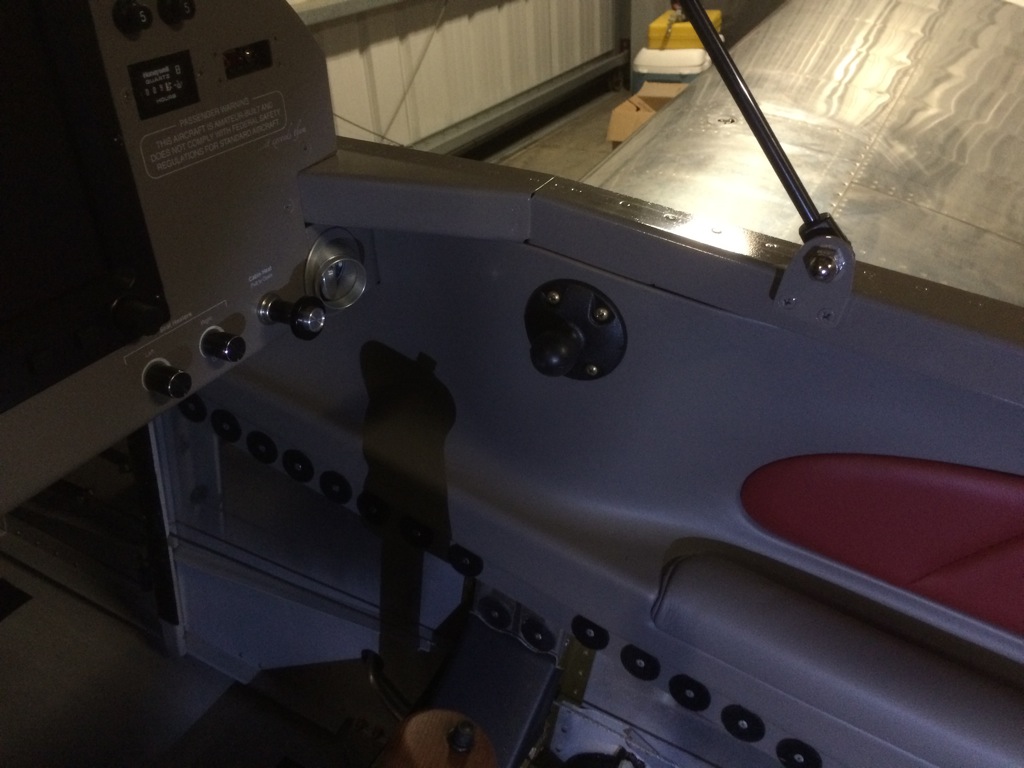 Here’s the one on the left side. 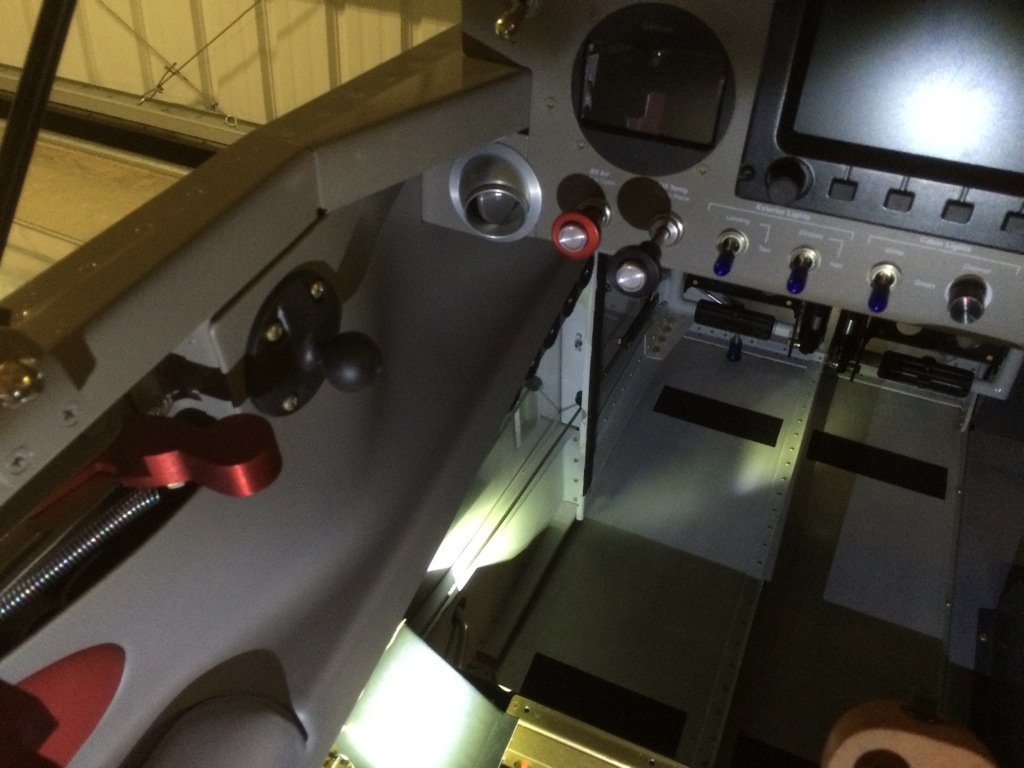 I’ve been flying with an iPad mini for ForeFlight since I like it as a nav backup and I keep my POH, avionics owner’s manuals, etc. in there.  I was just laying it on the seat, but that’s a pain when I want to do some acro.  Mounting it should keep it handy but also keep it from flying around the cockpit when inverted. 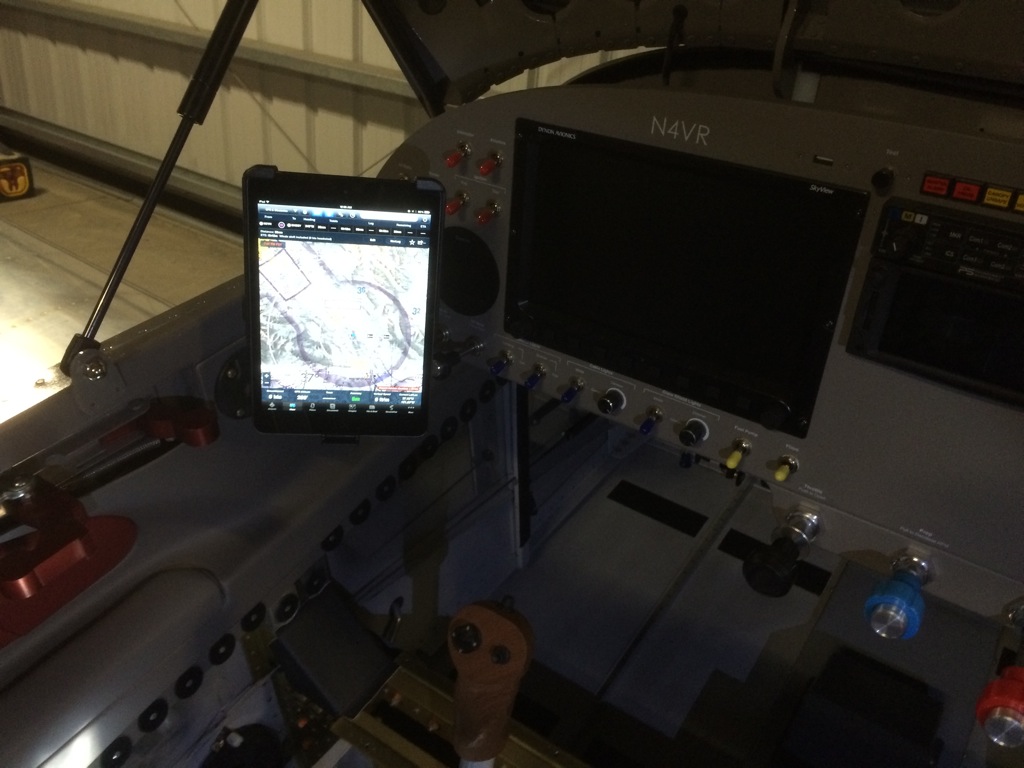